Genetic control and evolution of insect resistance in forest trees

Insect herbivory may drive evolution by selecting for trees with heritable resistance against defoliation. The spruce budworm (Choristoneura fumiferana) is a highly damaging forest insect pest that can affect population structure of white spruce (Picea glauca) in North America.

Resistance against spruce budworm was recently described in white spruce and was linked to three constitutive resistance biomarkers: piceol and pungenol (phenolic compounds), and Pgβglu-1 (the expression of a beta-glucosidase encoding gene).

Professor John MacKay and Dr Geneviève Parent of the Department of Plant Scienceswere part of the study investigating the phenotypic variability and heritability of these three resistance biomarkers.*1 Their fieldwork spanned seven field sites across Eastern Canada and included data from the foliage of 874 trees.

These findings about the predominant additive genetic basis of the resistance biomarkers show that adaptive evolution of white spruce natural populations to resist to spruce budworm is possible and that potentially important gains could also be expected from selective breeding.

The team also tested to see if the biosynthetic model for the acetophenone production is conserved across the pine family (Pinaceae) and land plant species.*2  They assayed and surveyed the literature and sequence databases for possible patterns of the presence of the acetophenone aglycons piceol and pungenol and their glucosides, as well as sequences and expression of Pgβglu‐1 orthologues.

The study concludes that the biosynthetic model for acetophenones appears to be conserved across Pinaceae, whereas convergent evolution has led to the production of acetophenone glucosides across land plants.

Together, the two studies show that the accumulation in acetophenone compounds is both genetically controlled and subject to considerable variations within and among plant and tree species. The newly defined role of piceol and pungenol in white spruce insect resistance is likely to carry over to other species in North America, Europe and Asia. 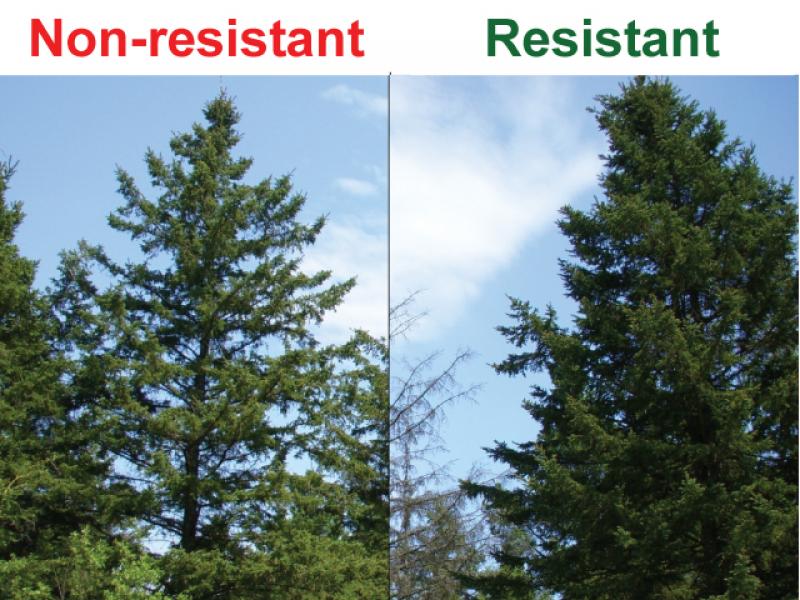